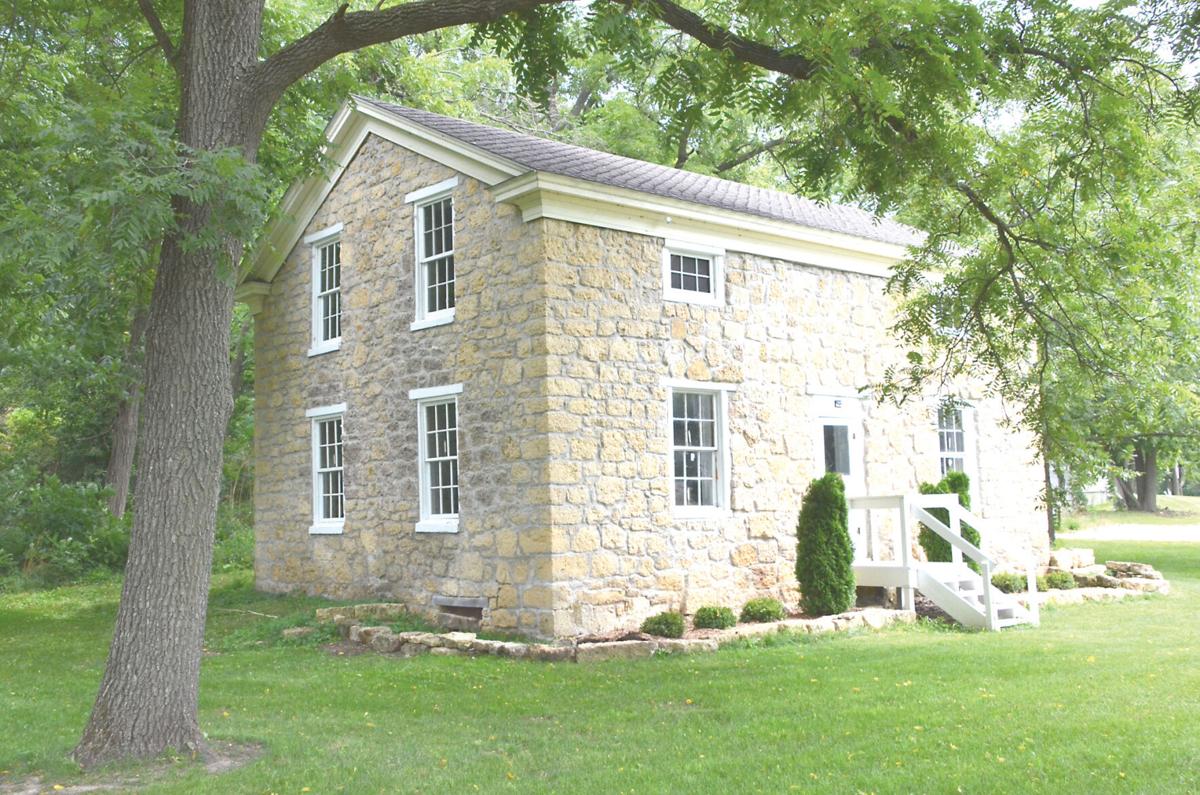 The Stone House Memorial Park celebration and dedication is scheduled for 10 a.m. to 3 p.m. Saturday, Sept. 4, at the site along Illinois 78 at the northern edge of Mount Carroll. Also known as the Emmert House, the Stone House was built in 1841.

The Stone House, the second home ever constructed in Mount Carroll when it was built in 1841, had been deteriorating over

the decades until a group of local citizens got involved in saving the historic structure.

The Stone House Memorial Park celebration and dedication is scheduled for 10 a.m. to 3 p.m. Saturday, Sept. 4, at the site along Illinois 78 at the northern edge of Mount Carroll. Also known as the Emmert House, the Stone House was built in 1841.

The Stone House, the second home ever constructed in Mount Carroll when it was built in 1841, had been deteriorating over

the decades until a group of local citizens got involved in saving the historic structure.

On the upcoming Labor Day weekend, citizens will be joining together for a dedication of the oldest surviving structure in the Mount Carroll.

The Stone House Memorial Park celebration will be held at the property (Illinois 78 and State Street), between 10 a.m. and 3 p.m., with a dedication at 11 p.m., on Saturday, Sept. 4.

The park-like, picturesque setting at the north edge of Mount Carroll will be full of artisans and games for all ages. People will be able to see period-style clothing and actually put a yolk on to demonstrate how people used to haul water. Tours of the Stone House will be given and food will be available.

Also known as the Emmert House, the Stone House was constructed in 1841 by David and Susan Emmert and was the second home built in Mount Carroll; the first to be constructed from the area's native limestone. David and Susan Emmert are considered one of the true founders of modern-day Mount Carroll, having helped erect the first gristmill in the region, having worked toward relocating the county seat to the city and the construction of the courthouse, and having donated the land for the city's first cemetery.

In 1850, an addition was built from red bricks fired across the street at the local Hallet brickyard. The house includes a clear water spring in the cellar, along with a huge fireplace, which at one time had a beehive oven. The spring runs through the house's basement, never freezing. For many years it served as a source of water and refrigeration for not only the homes residents, but for the people of Mount Carroll.

However, the Stone House suffered major damage in early 2007 when flooding caused an entire wall to collapse. Not too long after this, members of the community became involved.

Nancy Gmitro said she and her husband, John, first saw the property when driving through town when they moved here in 2004. The couple became invested in the property when the wall collapsed and they learned its history.

"We decided it should be saved," Gmitro told the Mirror-Democrat.

The Mount Carroll Community Development Corporation (CDC) purchased the property in 2007, with plans to restore the historic structure. In 2014, volunteers — including Randy Stadel, owner of Pleasant Valley Construction, and his crew— installed a new roof on the structure. Gmitro said that following the death of CDC president Lou Schau on Jan. 6 2015, the project stalled.

Gmitro, Len and Linda Anderson and Chris Rogers approached the Mount Carroll City Council in the fall of 2018 about the city taking ownership of the property and working on rebuilding the house through donations.

Len Anderson has noted that donations from the community have flooded in, saying, "We were really fortunate” regarding the large amount of donations received.

Through the fall of 2018 and winter of 2019, Rogers rebuilt the wall and cut and placed similarly matching limestone stones, which had been donated, on the front facade. Since then, volunteers have worked on additional upgrades, including walking paths, front steps, a walkway through the building and the addition of period-appropriate furniture and similar items for the inside.

"It really came out better than expected," Len Anderson said.

The front yard shows some landscaping and signage, along with a covered wagon and four picnic tables — two adult and two children's tables.

A master gardener, Gmitro has established an herb garden on the property and hopes to do even more. She said she has begun work on a section of prairie for the property, which has been sprayed for weeds and mulched. She plans to incorporate a wide selection of 1840's style plants that would have grown wild or have been available for purchase at that time.

The property has been established as a city park, with the Andersons, Rogers and Gmitro looking for other volunteers to join the Friends of the Stone House to keep it running. Linda Anderson and Gmitro said they have received help from some local volunteers.

Gmitro said she hopes the town along with visitors will utilize the property. She noted the area would be a great stop for people driving along the highway for picnics, and the space also would work well for parties and weddings.

"I feel like this is a historic park. It's not like a lot of our other parks in town," Gmitro said.

Linda Anderson said the group and other volunteers also are working to highlight the property as not only a park, but also a welcoming center and learning center. She noted that it could be a great place for school-age children to come for local history lessons.

The four organizers and the city are excited about the upcoming celebration, with Gmitro saying, "It's been a long project and I think Sept. 4 is a real culmination of the project.”

The Andersons said more is planned for the location and volunteers are needed to keep the project moving forward. Anyone interested in helping or wanting more information can call Len and Linda Anderson at 815-244-7875, Nancy Gmitro at 815-244-4090, or Chris Rogers at 815-509-4654.