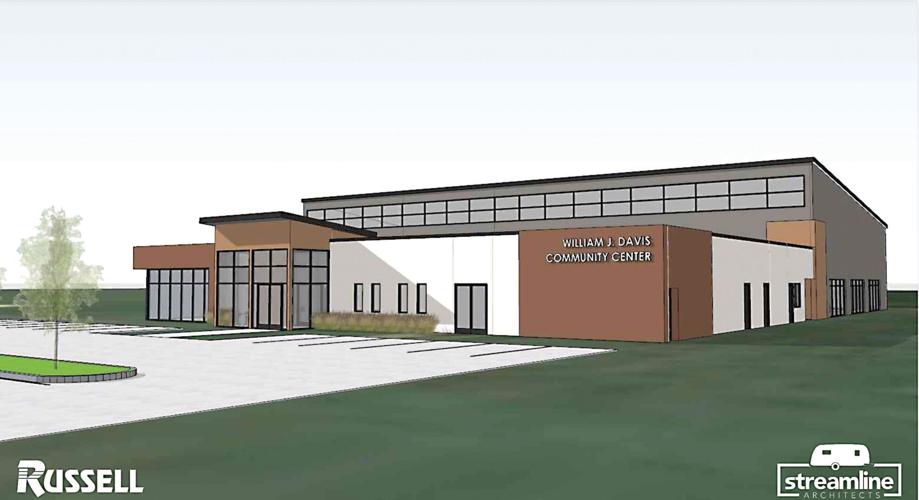 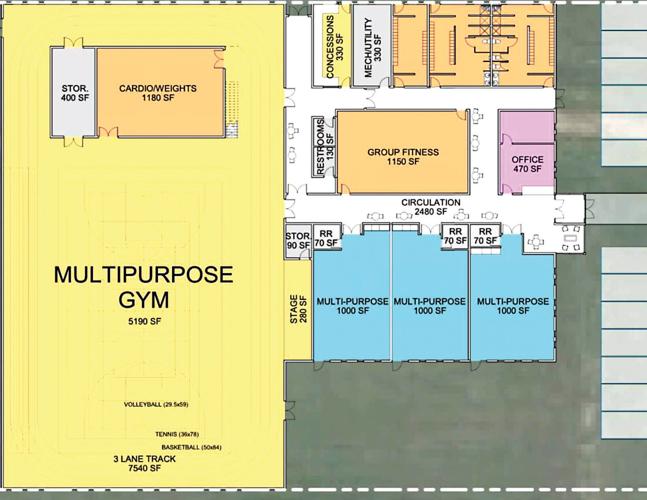 One of slides from the architects’ PowerPoint presentation depicts the interior of the William J. Davis Community Center.

One of slides from the architects’ PowerPoint presentation depicts the interior of the William J. Davis Community Center.

Andrew Dasso and Saloni Sheth from Streamline Architects attended the Tuesday, March 8, city council meeting with a PowerPoint presentation featuring floor plans and other design plans for the community center, which will be built on 1.5 acres just north of the West Carroll Middle School.

The community center will have parking lot access from both South East Street and the WCMS north parking lot. The design includes the creation of 62 new parking stalls and the gross square footage of the actual center will be 24,960 square feet.

A general floor plan for the center includes a 5,190-square foot multipurpose gym on the west side of the property. The design team tried to maximize the track size in order to minimize the number of laps to equal a mile. The inner lane requires 13.5 laps to equal one mile, the middle lane 12.8 laps, and the outer lane 12.3 laps.

The gym's bleacher capacity will be 312 occupants and the gym floor will be lined for basketball, volleyball, pickleball and tennis.

Due to requirements for a basketball space, the gym is required to be at least 25 tall, Sheth said. With the higher ceiling in mind, the architects presented a possible floor plan for a small mezzanine space above the weight room, with additional cardio or weight space overlooking the gym courts.

The center's floor plan also includes locker rooms and a concession area, which can be accessed from inside and outside of the building. A group fitness space and office space is included as well as three 1,000-square foot multipurpose rooms.

Ald. Mike Risko asked how big the kitchenettes in each multipurpose room would be and Sheth said they are small at this time. Mayor Carl Bates agreed the council will need to define exactly what a kitchenette is, with Ald. Joe Grim suggesting that perhaps one of the three spaces could have the main, larger kitchen area and the other two spaces could have smaller kitchenettes.

Dasso and Sheth also presented drawings of what the building’s exterior could look like and what some of the materials are that could be used. They said they wanted the building to slightly match the look of WCMS, while also having its own identity. Dasso said they hope to utilize some brick to tie into the city and downtown area. He noted that if brick were used for the entire building they would be over-budget very quickly.

The presentation was greeted with positive responses from the council, with Ald. Paul Kaczmarski saying, "I like it, I think you did a great job.”

Dasso asked for council approval of the proposed schematic for the floor plan, discussing the next few steps in the project. He said Fehr Graham will be developing a grading plan and site layout plan while surveyor Lyle Eaton will determine easement requirements for the new access road to South East Street.

"I think we're still on pace for construction to begin in the summer," Dasso said.

The tentative schedule shows the design/preconstruction phase to continue through June. Bidding could begin in May, taking five weeks, and construction could begin as soon as July. Construction is expected to take about a year.

Mayor Bates was hesitant to give official approval of the floor plan without knowing costs. He said that by the March 22 meeting he would have the names of the five committee members for the council's approval. Management of much of the planning process would be handed over to this board after that.

Bates asked Dasso and Sheth if they could return on April 26 with more firm cost figures. Dasso agreed that they would be approximately half way through design development phase, which takes six to eight weeks, at that point. He felt confident he could have working estimates for that meeting.

The council agreed that they approved the general direction of the floor plans, contingent on costs.