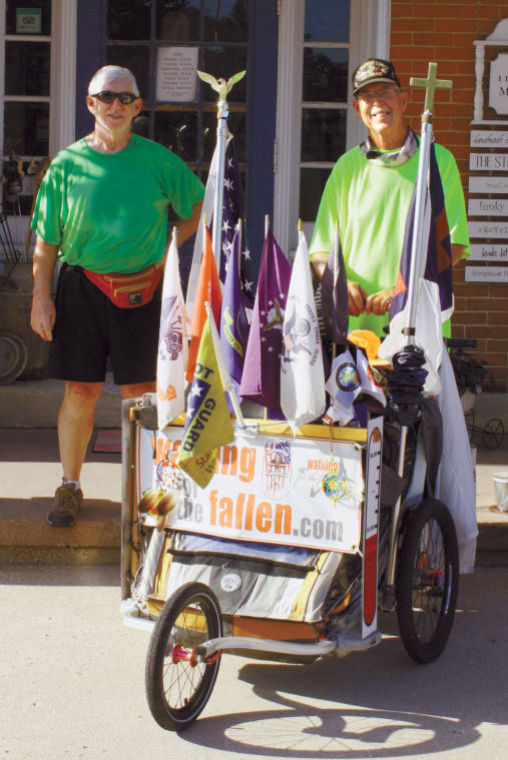 Larry Despain, left, welcomes Sgt. Chuck Lewis to the historic Glenview Hotel in downtown Mount Carroll Wednesday, July 17, where the 62-year-old veteran who is on a 3,300-mile walk across the nation was given a room for the night. The veteran is walking to raise awareness about returning soldiers and their needs and to raise money for wounded and disabled veterans' programs. 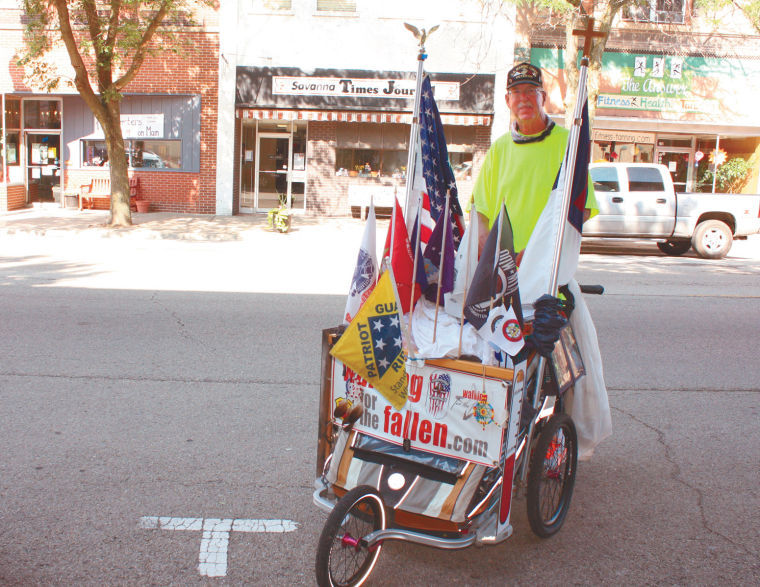 Sgt. Chuck Lewis stands in downtown Savanna. On Wednesday, July 17 the 62-year-old veteran passed through Savanna and walked into Mount Carroll while on his 3,300-mile walk across the nation. The veteran is walking to raise awareness about returning soldiers and their needs and to raise money for wounded and disabled veteran’s programs.

Larry Despain, left, welcomes Sgt. Chuck Lewis to the historic Glenview Hotel in downtown Mount Carroll Wednesday, July 17, where the 62-year-old veteran who is on a 3,300-mile walk across the nation was given a room for the night. The veteran is walking to raise awareness about returning soldiers and their needs and to raise money for wounded and disabled veterans' programs.

Sgt. Chuck Lewis stands in downtown Savanna. On Wednesday, July 17 the 62-year-old veteran passed through Savanna and walked into Mount Carroll while on his 3,300-mile walk across the nation. The veteran is walking to raise awareness about returning soldiers and their needs and to raise money for wounded and disabled veteran’s programs.

The 16-mile trek is just one small stretch of the way in a 3,300 mile walk across the United States for Sgt. Lewis, who left Everett, Washington on March 30 and intends to reach Washington, D.C. by the end of September.

The walk, titled “Walking for the Fallen – USA,” has a two-part purpose. Sgt. Lewis, who is from Ronan, Mont., hopes to first raise awareness about the “cost of freedom” in this nation by talking with children, adults and various organizations while on his travels. Secondly, the veteran hopes to raise $50,000 for wounded and disabled veterans’ programs.

“Just because I am a Vietnam veteran I can't say that I know what it was like for those returning from Iraq and Afghanistan,” said Sgt. Lewis while taking a quick break Friday. “I don't have the skill set to help them, but there are those out there that do. I can walk and raise the money for those groups that do know how to help.”

“I might not reach my goal of $50,000, but every step taken for the men and women serving our country is an honor,” said Lewis.

Averaging 20 miles per day, Lewis said he has seen all types of weather.

“Snow, rain, wind, heat...I’ve seen it all. I have lived in a desert, so I'm used to temperatures of 115 degrees, but we never had this kind of humidity,” he said as he walked down the streets of Savanna with a full day along Illinois 64 ahead of him.

Sgt. Lewis is keeping track of how much money is raised in each of the 14 states that he will travel through. While on his travels the soldier is also finding out about great veterans’ organizations in each state, and he plans to make sure the money raised in each state goes back into that state to help returning soldiers and veterans.

The retired marine is headed into Chicago before his trek will turn south taking him through Indiana, Kentucky, Tennessee and North Carolina where he will then head north toward D.C.

Since Sgt. Lewis is walking primarily along highways, for safety reasons, a ride has been arranged through the heaviest Chicago traffic into downtown where he will visit the National Vietnam Veterans Art Museum.

Every dollar he raises while on his walk will go directly to support wounded, disabled returning servicemen and veterans. None of the money he is raising is used to assist him in his walk, he said.

“I try to plan my stops in towns so I can call the churches or the VFW or the American Legion and see if they will let me sleep on the floor,” said Sgt. Lewis.

“If I happen to be out away from a town I will stop at a ranch or a farm and ask if they mind if I pitch a tent in the front yard for the night. I don't spend anything out here that I wouldn't spend if I were at home. Every dollar I raise out here will go to helping others,” he stated.

Sgt. Lewis said he is absolutely astounded by the hospitality of the people he has met throughout his travels.

The veteran is traveling completely on his own although he said he feels like he has a group of veteran angels watching out for him.

He is also gathering followers as he crosses the nation who can keep an eye on his whereabouts on his website at www.walkingforthefallen.com. The website has a tracking device that pinpoints his location every 10 minutes, and many of his new and old friends are checking on him through the site.

Sgt. Lewis's wife tracks him on his website as well.

“The hardest part of this walk is missing her,” said the 62-year-old veteran. “When your kids grow up and it is just the two of you, you become more than spouses. You become each other's best friend, and it is hard to be away from your best friend.”

The two were reunited for a one-week vacation while Lewis traveled through Iowa. They were able to spend some time together with friends who lived in the area.

While in the Mississippi Palisades State Park, Lewis was able to visit with one of his daughters and his son-in-law, taking an evening to enjoy some family time. The next morning, he was up and back to walking by 8 o'clock.

“Six months is a long time to be away,” said Lewis, “but then I think about the men and women serving overseas, and I think about the 40 years I've had that the friends I lost in Vietnam will never have. When I remember that, six months doesn't seem that long.”

Before starting his walk across the nation, Sgt. Lewis established “Standing for the Fallen – Montana.” He would dress in full uniform and stand in various places during holidays or special events to raise money for wounded and disabled servicemen.

Lewis told the heart-wrenching story of a young veteran in his hometown area who in 2005 returned to his home after serving in combat in Afghanistan and took his own life.

“It was then that I realized how big this problem was. This wasn't just a local issue. This was nationwide. I needed to do something that would bring attention to this across the whole nation. We can't know what they are going through, but we can do what we can to help,” said Sgt. Lewis, noting that more soldiers returning home from Iraq and Afghanistan commit suicide than the number who have been lost in combat.

While in Savanna a local restaurant manager purchased lunch for the veteran and several residents walked up to shake his hand, some offering a donation.

Each time he was approached, Lewis openly answered questions and earnestly asked after each person and the veterans or soldiers in their lives. In word and deed the patriot sincerely displays his deep concern and pride for both young soldiers and seasoned veterans.

While in Mount Carroll, Sgt. Lewis was offered an air-conditioned room by a local business owner, getting him off the ground/floor for a night and giving him a place to cool down.

When asked if there was anything he needed while in the area, Sgt. Lewis thought only of the military men and women that he is trying to help.

“If people would feel compelled to donate, well then, that would be wonderful,” he said.

If you missed seeing Sgt. Lewis in person, donations can be made on his website. There is also a place to leave comments to encourage the veteran on the last half of his honorable journey.