Diane Manikowski, standing left, assistant librarian at the Mount Carroll District Library, researched and presented an enlightening program on Caroline Mark Saturday morning, Jan. 25, at the library. The program was in conjunction with the community’s observance of Mark’s 200th birthday this Sunday, Feb. 2. Her estate provided funds for the Caroline Mark Home. 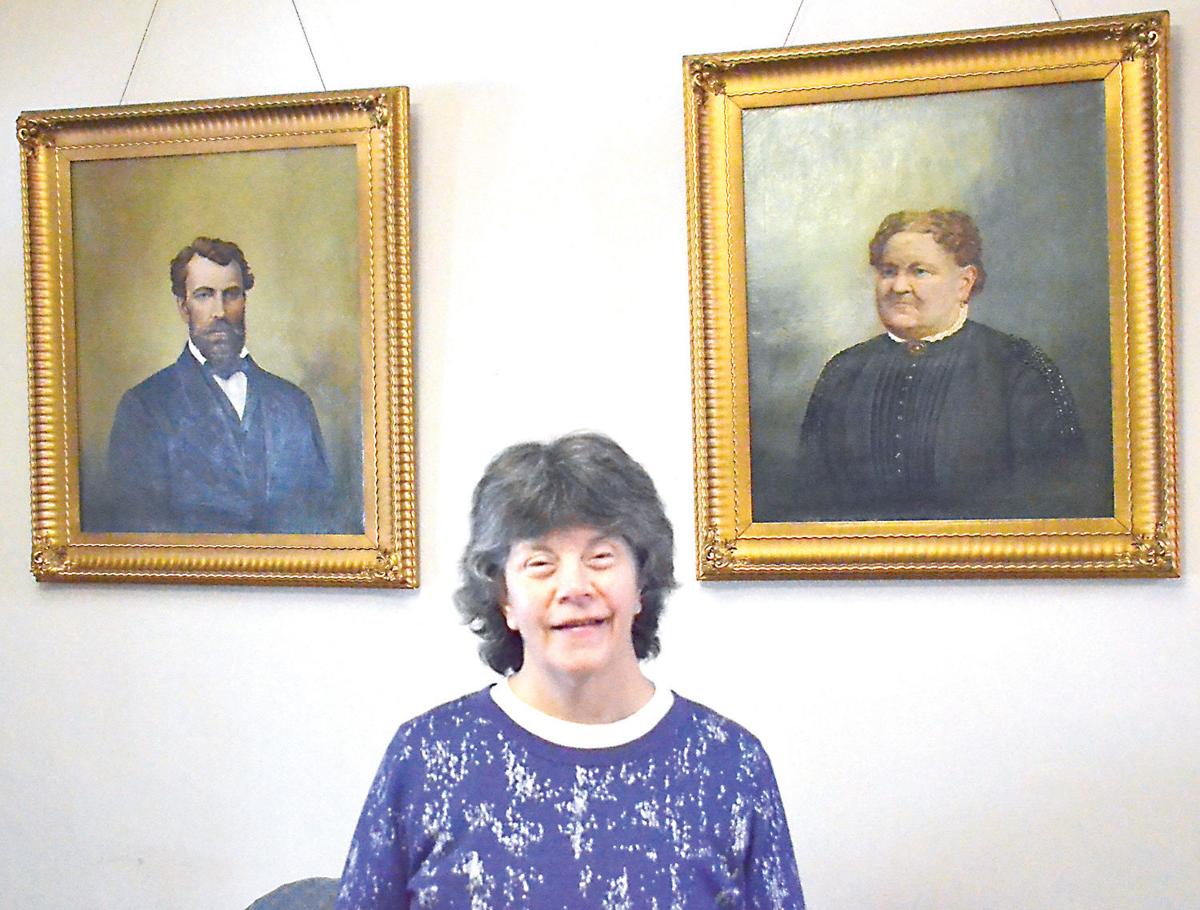 An open house to celebrate Caroline Mark’s 200th birthday will be held from 2-4 p.m. Saturday, Feb. 1, at the Caroline Mark Home, 222 E. Lincoln St., Mount Carroll. Refreshments will be served at the open house. She was born Feb. 2, 1820, in Virginia. The home for women opened in 1908 and is listed on the National Register of Historic Sites. Caroline Mark Home Manager Robin Klimstra stands in front of photos of James and Caroline Mark.

Diane Manikowski, standing left, assistant librarian at the Mount Carroll District Library, researched and presented an enlightening program on Caroline Mark Saturday morning, Jan. 25, at the library. The program was in conjunction with the community’s observance of Mark’s 200th birthday this Sunday, Feb. 2. Her estate provided funds for the Caroline Mark Home.

An open house to celebrate Caroline Mark’s 200th birthday will be held from 2-4 p.m. Saturday, Feb. 1, at the Caroline Mark Home, 222 E. Lincoln St., Mount Carroll. Refreshments will be served at the open house. She was born Feb. 2, 1820, in Virginia. The home for women opened in 1908 and is listed on the National Register of Historic Sites. Caroline Mark Home Manager Robin Klimstra stands in front of photos of James and Caroline Mark.

Caroline Mark’s 200th birthday is Sunday, Feb. 2, and what strikes me most about Caroline Mark is how generous and incredibly forward-thinking she was in a time when women might not have been expected to be that way — and how many lives she made easier.

Since the Caroline Mark Home opened in 1908 in Mount Carroll, there have been almost 340 residents, 13 trustees, and 14 managers. Rosemarie Phillips was the longest-serving manager at 30 years. Jud Smith is the second longest-serving trustee at 30 years. The longest term was held by his father, D. Sackett Smith, for his 33 years of service. Current trustees are Clint Roberts and Dawn Holland. The manager is Robin Klimstra.

Illinois became a territory in 1809 and a state in 1818. Carroll County, which had been part of Jo Daviess County, came into its own in 1839.

Caroline Wade was born on Feb. 2, 1820, in Virginia to poor parents. It was written that "her early advantages were very meager, and, realizing her opportunities in her native home would be limited," she came west. In 1836, Caroline Wade arrived in Mount Carroll at age 16. She had no contacts here when she arrived. The first mention of her is when she helped feed sick workers at the Halderman-Emmert grist mill.

James Mark was born 7 years earlier than Caroline, in 1813 in Scotland, to a poor family. He would migrate to Mount Carroll in 1837 at the age of 24, arriving a year later than Caroline. He is described as "poor in purse but rich in courage, energy and shrewd common sense."

In 1841 Nathaniel Halderman and David Emmert met in Mount Carroll and realized the need for a grist meal. They chose their site at Stag Point, which is at the west end of Market Street at the curve where it turns into Galena Street.

John Irvine and John Halderman joined them, and 3 of the 4 were experienced millers. A dam and mill race were built to bring water to the mill and return it to the Waukarusa River, also known as Carroll Creek.

Many workers were needed and David Emmert built a house at Stag Point for them. Mrs. Harriet Harmon built a second house and a passageway was made to connect them. Workers contracted a fever and Miss Caroline Wade helped the women feed the sick workmen.

The mill was the first industry in Mount Carroll, and its success encouraged many more settlers to come here. Flour was sold to locals and shipped to neighboring counties. Teams of horses would line up at the mill to take flour to Savanna from where it would be shipped to St. Louis.

In a short time, a general store was built by the mill owners. The first courthouse, the school and the first stone house (a hotel) were completed by 1844.

In 1843 Mount Carroll became the county seat. James (age 30) and Caroline (age 23) married and within three years, these two industrious, hard-working people had acquired 500 acres of land in Freedom Township. They continued to make sound investments and purchase more farmland.

The Civil War began in 1861, when James was 48. He corresponded with Robert M.A. Hawk, a younger friend of his who was born in Indiana in 1839 and was brought to Mount Carroll when he was nine. Hawk enlisted in 1862 with a friend and was a captain when he corresponded with James Mark.

Capt. Hawk writes, "I cannot see how possibly they (the Confederacy) can hold out much longer. Many of the citizens of Georgia have petitioned the President (Lincoln) to restore the old form of government. They say they are tired of war and are willing to accept peace on any terms, that slavery has played out and that certainly need not stand in the way of peace. I think the war will close by the 4th of July, 1865."

Capt. Hawk finished the letter, writing, "The boots arrived allright [sic] just before we left Marietta. They fit first rate. I shall not very soon forget the donor and shall feel only too proud to call him 'friend' and sometime be able to return his kindness."

The letter is dated Dec. 29, 1864, and speaks to the generosity of James Mark. Mr. Hawk was later elected in 1878 to 2 terms in the U.S. House of Representatives. He remains the only Mount Carroll resident to have served in the U.S. Congress. (He is buried at Oak Hill Cemetery.)

In 1864, James Mark, now a highly respected and prosperous landowner and stockman, was made the president of the National Bank of Mount Carroll. In 1866, the Marks took in three little girls to raise: Caroline, Gertrude and Annie.

Three years later, James drowned on Feb. 13, 1869, when he was traveling home by horseback during a storm. He attempted to cross the Waukarusa River when the waters took him under the ice. His horse was found the next day with a broken hind leg, but it was a few more days before James' body was discovered.

His estate was valued at more than $90,000. "Caroline bought the interests of the collateral heirs in the estate, and she continued the active management and control of her extensive farming operations and business affairs to the day of her death." (From the 1910 Carroll County Mirror Souvenir Edition). She lived another 31 years without him.

In 1894 Caroline had her will written, with generous bequests for relatives and friends. But having met older women who were poor, alone or homeless, she left the larger portion of her estate to build a home for such women. She died at her home on April 27, 1900. Her estate was valued at $600,000, which, I am told, would be $15 million today.

Her will was fiercely contested by relatives and other heirs. Some claimed she was not mentally capable or she was illiterate or tricked by her lawyer, but the courts upheld her will.

Oscar McKinney and Frederick were the first trustees named by Mrs. Mark, and they were in charge of the construction of the home. Berkley Brandt of Chicago was chosen as the architect.

Construction materials were chosen for durability, strength and fireproofing and included cement, brick, iron and stone. In 1906, construction began, and the home was finished late in 1907. In 1908, the first residents moved into the building that could house 40 persons.

The building is 130' long by 30' to 50' wide in places with 11' ceilings. Outbuildings included an ice house, a butchering and smokehouse, a pump house, and a wood and coal house that was converted to the manager's quarters. The fully finished basement included laundry facilities and storage and the boiler. A water tank runs the width of the building. Because of its solid structure, the house became a civil defense shelter. It is listed on the National Register of Historic Places.

House rules for residents have changed over the years, but the constant is that residents must be able to take care of themselves.

On a tour of the home with manager Robin Kelley, we entered from the north door, closest to the parking area, and turned around in the foyer to see this incredible tile work and the main staircase.

The detail in the home is everywhere. For women who struggled to make every end meet, the house may have seemed luxurious beyond belief. The brick, wood and tile work were a testament to Caroline Mark's wishes for the comfort of the home's residents.

The glass transoms were changed to wood. In the southeast sitting room is the last oil lamp in the home. The size and beauty of the comfortable room is remarkable.

The staircase takes you from the kitchen to the basement laundry room. Is this the only spiral staircase in the county? There is stairway to the sunny mezzanine above the back entrance with a small sitting area.

There is a sunny sitting room at the top of the stairs. Every window seat in the house has a radiator under it. The view from every window is lovely and t he closets were designed to make use of every inch. The shared bathrooms on the first and second floors have been updated for the comfort of the residents.

There is an incredibly enormous basement. Two safes contain the ledgers of all transactions since the home opened. There is a water reservoir for the boiler which runs the width of the basement. I doubt I'll ever see anything like it! There is incredibly lovely front porch on the south side of the home, with the original front entrance.

For the hundreds of times I've driven by the house on East Lincoln Street, I'd never noticed the clock in the middle. When it stopped working, the parts were sent to a clockmaker in Freeport for repair. But he unfortunately died, and he only had records in his head. Former trustee Jud Smith told me that Alex Veith would have been willing to replace the parts so many years later, but it was already past the point of repair.

And just as there was a building boom going on when James and Caroline moved to Mount Carroll, there were some pretty important buildings under construction at the same time as the Caroline Mark home. Other prominent people of the era would include:

•Frances Ann Wood Shimer, who was 6 years younger than Caroline Mark, and created the college in Mount Carroll.

•Walter R. Watson, who was Carroll County Clerk for many years

Support for the home comes from any generous gifts and bequests, as well as investments and several farms continue to generate income for the home.

I marvel at the gift Caroline Mark gave to our community. In an era where women were dependent, her determination to create this home broke every rule. In the communities in which I've lived, there was never a place quite like this.