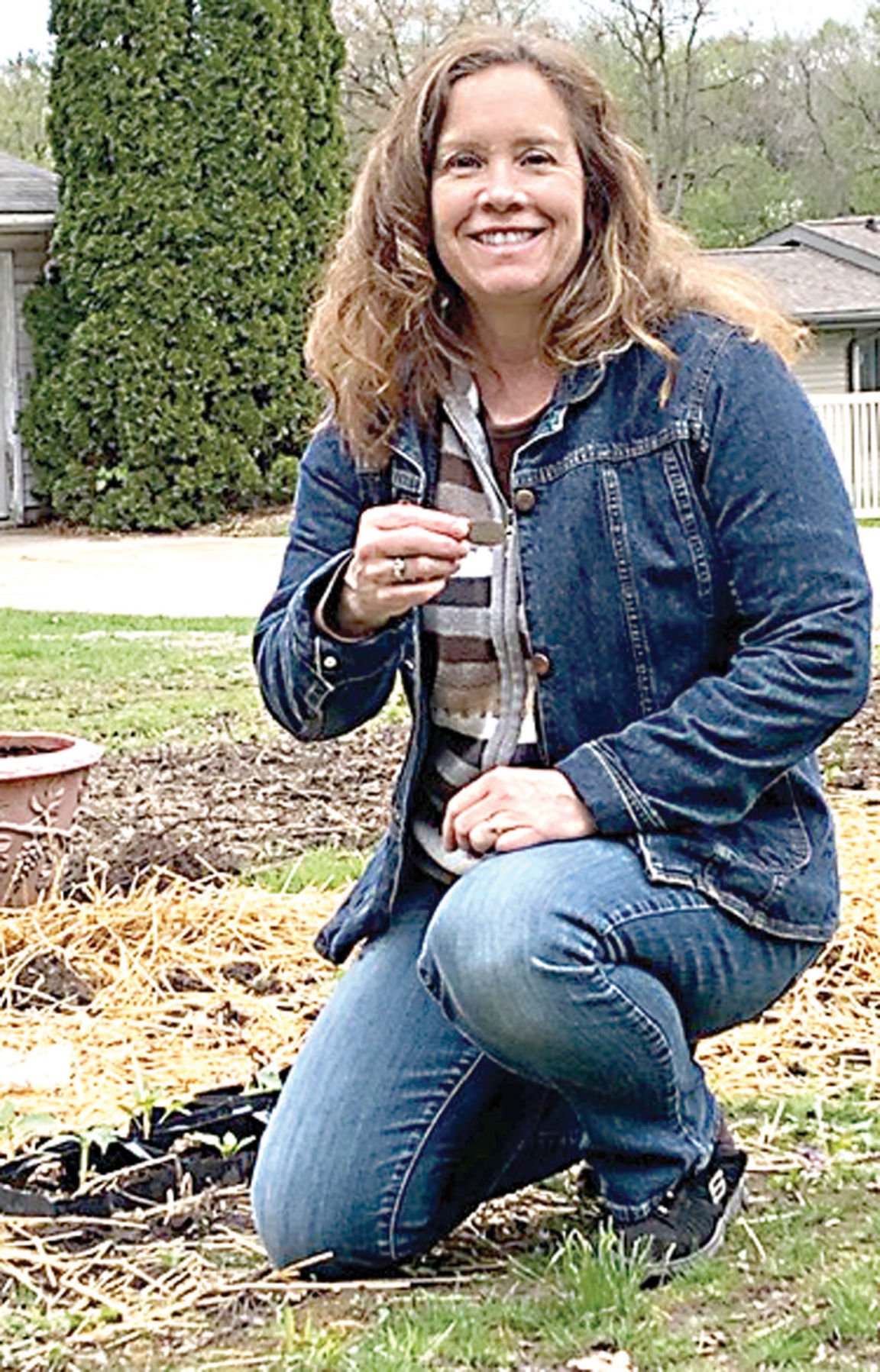 Judy Fitzpatrick unearthed part of a keychain while working in her garden which had had the name and address of a former Mount Carroll resident. Fitzpatrick holding the item, posted a picture of it on social media, eventually leading to the daughter of the original owner receiving the keychain. 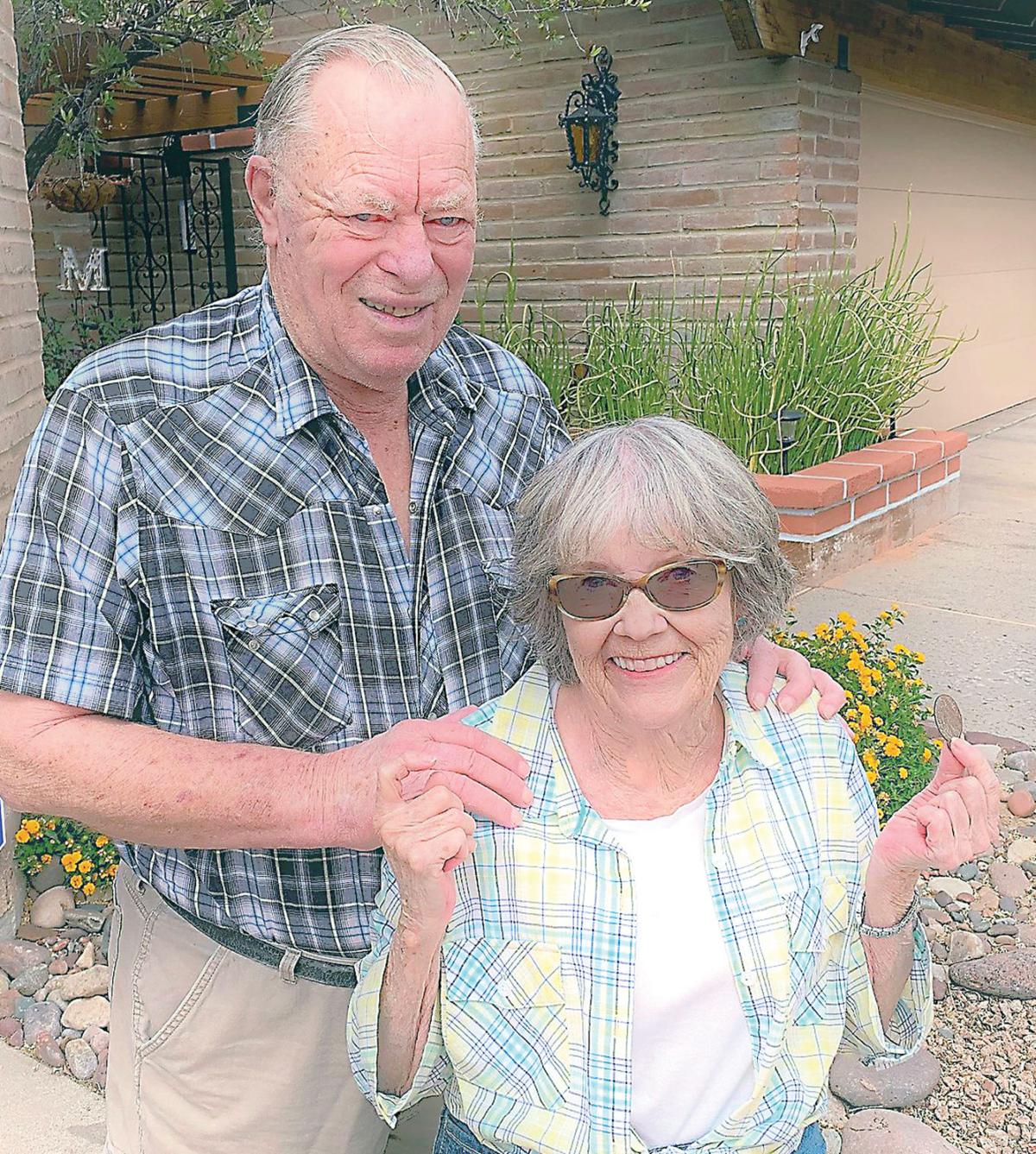 Colleen Davis Hartman, with her husband, Lloyd, holds the keychain at their Tucson, Ariz., home. 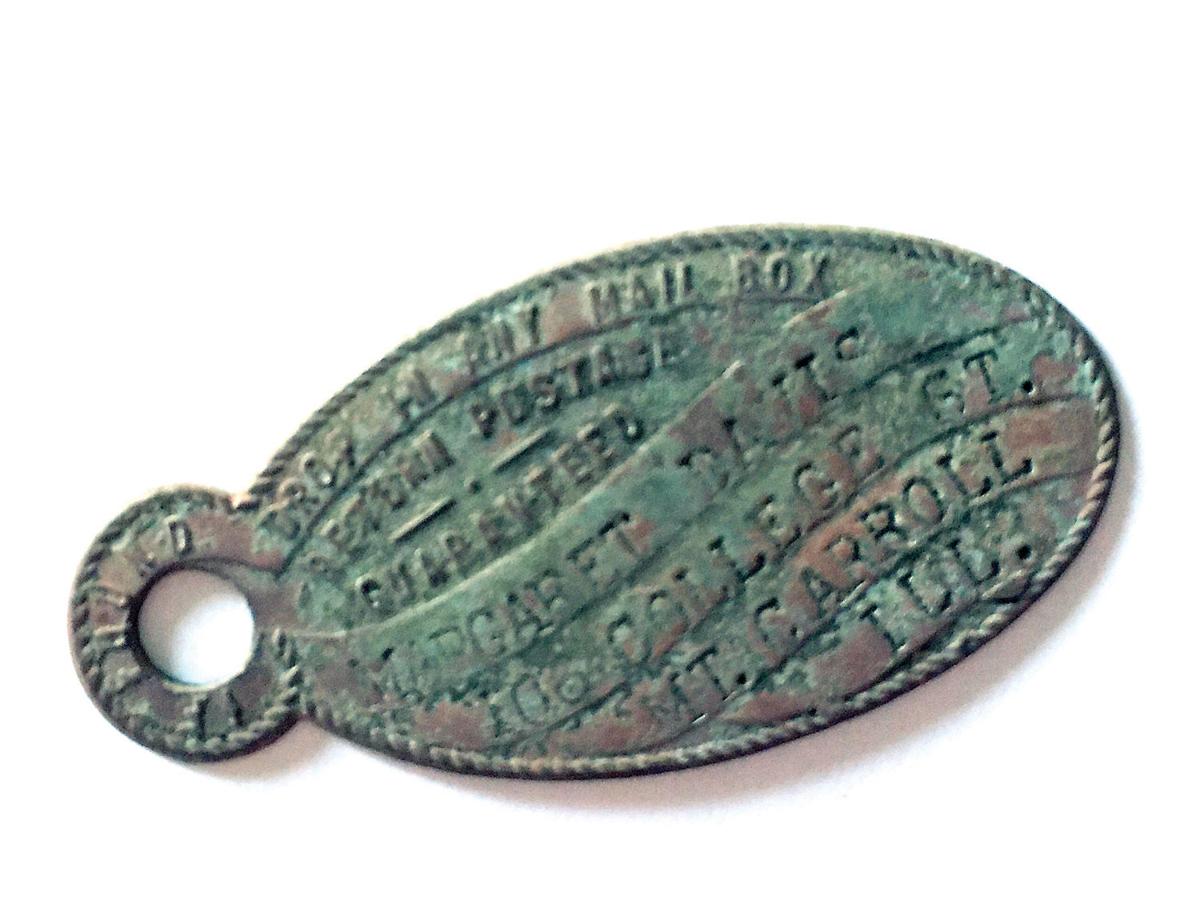 This is the keychain charm Judy Fitzpatrick unearthed in her garden containing the name and address of Margaret Davis.

Judy Fitzpatrick unearthed part of a keychain while working in her garden which had had the name and address of a former Mount Carroll resident. Fitzpatrick holding the item, posted a picture of it on social media, eventually leading to the daughter of the original owner receiving the keychain.

Colleen Davis Hartman, with her husband, Lloyd, holds the keychain at their Tucson, Ariz., home.

This is the keychain charm Judy Fitzpatrick unearthed in her garden containing the name and address of Margaret Davis.

A day of gardening recently unearthed a unique piece of Mount Carroll history.

Judy Fitzpatrick, who lives with her family at 304 E. Broadway St., went outside Saturday, May 2, and planted some tomatoes in her new garden.

In years past she and her husband were unable to have a garden due to too much shade from their yard’s many trees. However, after several trees were recently removed, the couple decided to have a garden this year.

While planting a tomato plant, Fitzpatrick dug up what she first thought was a military dog tag. After cleaning it off and taking a better look, she discovered it to be an old metal charm one would attach to a key chain.

According to the inscription on it, anyone finding the charm was asked to return it by “dropping it in any mailbox” to Margaret Davis, 106 College St., Mount Carroll.

"I thought, ‘How did this get in my yard?’” Fitzpatrick said. "It's kind of a mystery."

After searching online for the name and finding conflicting results, Fitzpatrick and her husband decided to post a picture of the charm on the "You know you grew up in Mt. Carroll if you remember..." Facebook page.

"It was fun to just post it on there and see if anyone knew who Margaret Davis was," Fitzpatrick said in an interview with the Mirror-Democrat.

The Fitzpatricks did not expect to have the answer to their mystery within the same day via Facebook.

Mount Carroll native Lloyd Hartman, now living in Tucson, Ariz., is a member of the Facebook page and saw the post, telling his wife, Colleen (Davis) Hartman, who happens to be the daughter of Margaret Davis.

"I was just so excited, I just couldn't believe it," Colleen said in a telephone interview with the Mirror-Democrat. "We replied right away."

Colleen said she does not remember her mother having the keychain charm, but guessed it must have been in the ground for 70 years or more.

Colleen explained that the address at 106 College Street was the home of her grandparents, Mr. and Mrs. Alexander Davis. Margaret Davis lived with her folks before she married Jesse Davis, Colleen’s father. After her parents divorced when she was five, Margaret and the children moved back in with Colleen’s grandparents. The family proceeded to live at several other locations in Mount Carroll over the years.

According to Colleen, her mother, who was born in 1916, worked at the Savanna Army Depot and also the Savanna Garment Factory. She lived in Tucson from 1967 until her death in 1996.

Colleen said she is so touched and excited to be able to have an item that once belonged to her mother.

Judy Fitzpatrick said she was excited to have the mystery solved, and mailed the keepsake to Colleen last week, and Colleen received it Friday, May 8.

"It just kind of made your heart happy to just kind of make someone's day," Judy said, noting it was rather lucky that Colleen’s husband was part of the Facebook group. "It's such a small world.”

Colleen said there were a number of coincidences that were part of the story. She has known her husband for most of her life, and at one point, their respective families actually lived on separate floors of the same building in Mount Carroll.

Colleen recounted that after graduating high school, she and Lloyd both quickly married other people. She moved to Tucson and worked in the HR department of the University of Arizona at 24 years. She also spent some time as a professional photographer.

Almost 40 years after graduating high school, the two, whose respective marriages had ended, reconnected via email. They have been married since 2002.

"Thank heavens for the internet," she said with a laugh.

Colleen said she is looking forward to studying the keychain charm, which Judy Fitzpatrick noticed had an inscription on the back side saying, “Remember me,” along with initials that were not clearly readable.

Colleen said she also plans to share the keychain with her brothers, Terry and Jeffrey, who is a professor in Germany and makes film documentaries under the name Jeffrey Van Davis.