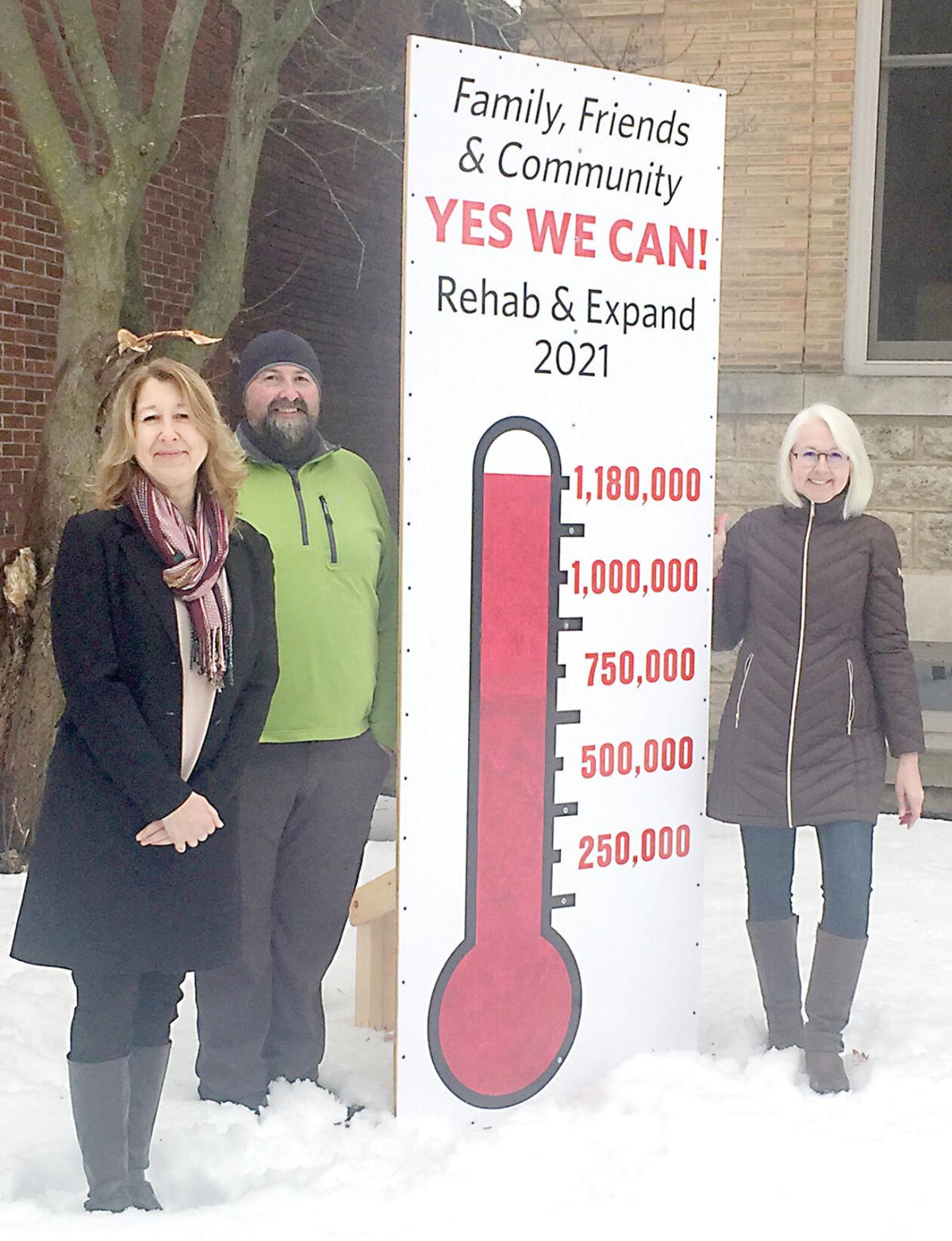 The thermometer in front of the Mount Carroll District Library measuring the growth of the Rehab & Expand fundraising campaign reflects that the goal has been achieved. Standing with the sign are, from left, Library Director Pam Naples, Library Trustee Pat Foltz and Library Trustee and Board Chairman Laurel Bergren.

The thermometer in front of the Mount Carroll District Library measuring the growth of the Rehab & Expand fundraising campaign reflects that the goal has been achieved. Standing with the sign are, from left, Library Director Pam Naples, Library Trustee Pat Foltz and Library Trustee and Board Chairman Laurel Bergren.

The proposed rehabilitation and expansion project is expected to cost $2.3 million and will add 7,289 square feet of library space to this historic building, partially funded by Andrew Carnegie and built in 1907.

The project will add two-stories at the rear of the current building and utilize the current exposed basement for a total of 10,668 square feet. It also will bring the library up to ADA (Americans with Disabilities Act) accessibility compliance.

Last year the library project became eligible to receive a $1,157,245 grant from the Illinois Public Library Construction Act Grant Program. However, to receive the grant, the library was required to raise $1,180,000 by the end of February.

During the Tuesday, Feb. 23, City Council meeting held in person at the Community House, Library Board President Laurel Bergren reported that more than 220 persons have donated approximately $760,000 to the expansion project. At its meeting held Jan. 26, the council approved a $3,000 donation from the city to the project.

However, as of Feb. 23, the library was still $423,000 short of its required matching amount. If the $1.15 million match amount was not raised, the library would lose the state grant. Bergren told the council previously that if this happened, the library could not move forward with the full project, but would still address the ADA accessibility issues.

At this same time, the City of Mount Carroll is set to receive around $12 million from the William J. Davis Trust. Davis died April 26, 1967, with his will establishing a trust with several organizations as beneficiaries. The trust was made in such a way that three of his relatives — first cousins Clarence Davis, Herbert Davis and Helen Grace Davis Marth — received annual payments while designated beneficiaries would not receive funds until all three of the individuals had died. The last of these three individuals, Herbert Davis, died in September 2019, at the age of 98.

Trust documents stated the City of Mount Carroll would receive 50 percent of the trust for "the erection and equipping of a Community Building for the use and enjoyment of the inhabitants of the City of Mt. Carroll, Illinois, said building to be called the William Davis Community Building" with trustees given the final discretion and approval of any plans presented by the city.

This amount was increased by approximately $1.87 million following a settlement with North Central College's Shimer College Great Books program, in which the college agreed to accept 18.25 percent of the trust, instead of the 30 percent set for "Shimer College in Mount Carroll" within trust documents.

During its Feb. 23 meeting, the city council unanimously approved an ordinance authorizing the acceptance of interim Davis Trust funds in the amount of $1 million. Ald. Doug Bergren abstained.

While a substantial portion of this amount is to be used for planning costs associated with the creation of a community center, the ordinance allows the city to donate no more than $443,788 to the library for its Rehab and Expand project.

Mayor Carl Bates spoke at the meeting about his reasoning for utilizing a portion of the Davis Trust funds in this way, again pointing out that if the library does not raise the necessary match amount, the grant would be lost.

Bates and City Attorney Timothy Zollinger said the city had approached the Davis Trust trustees to see if a portion of the funds could be used in this way. Zollinger said trust documents clearly show the use of the money is up to trustees' discretion and the library project is "really going to help the community," in line with Davis' intent behind the trust.

"I believe Mr. Davis, in his heart, believes this would be a great project," Mayor Bates said.

Library Board President Bergren expressed gratitude for the council's generosity. When asked for a time line on the project, she said that while library has two years to execute the project, they hope to move to construction as soon as possible. She did not expect to break ground until late summer, at the absolute earliest.

"We are so excited. Thank you," she said.